Facebook RSS Feed
← For your Holiday viewing and a great way to bring in the New Year!
Trade Shows Book Signings →

Many thanks to the Zebra for such a great write up of HOOKED and Aftermath, also appreciate the plug for the screenplay due completion March 1 2016.  The magazine is available in print throughout Washington DC and also online as well. 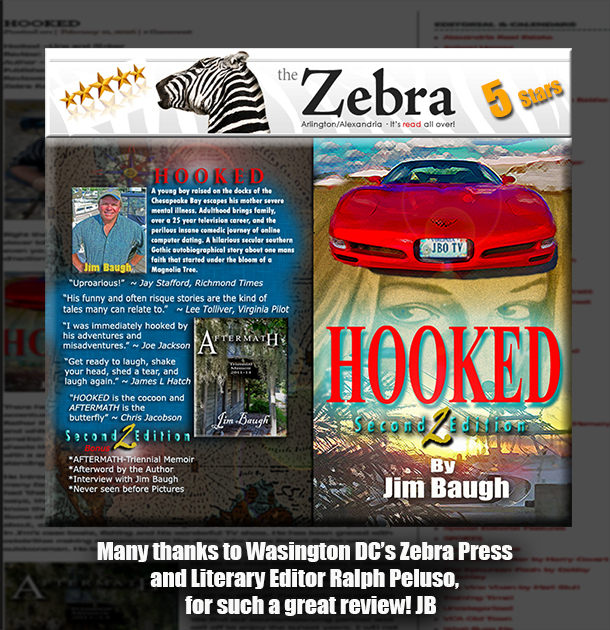 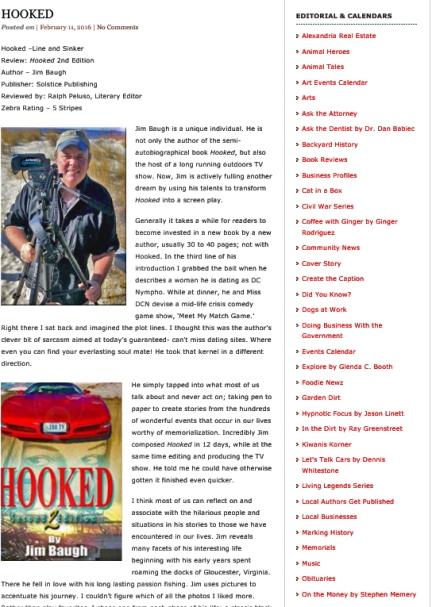 Full Story In Print and Online 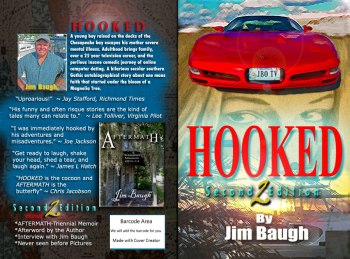 Jim Baugh is a unique individual. He is not only the author of the semi-autobiographical book Hooked, but also the host of a long running outdoors TV show. Now, Jim is actively fulling another dream by using his talents to transform Hooked into a screen play.

Generally it takes a while for readers to become invested in a new book by a new author, usually 30 to 40 pages; not with Hooked. In the third line of his introduction I grabbed the bait when he describes a woman he is dating as DC Nympho. While at dinner, he and Miss DCN devise a mid-life crisis comedy game show, ‘Meet My Match Game.’ Right there I sat back and imagined the plot lines. I thought this was the author’s clever bit of sarcasm aimed at today’s guaranteed- can’t miss dating sites. Where even you can find your everlasting soul mate! He took that kernel in a different direction.

He simply tapped into what most of us talk about and never act on; taking pen to paper to create stories from the hundreds of wonderful events that occur in our lives worthy of memorialization. Incredibly Jim composed Hooked in 12 days, while at the same time editing and producing the TV show. He told me he could have otherwise gotten it finished even quicker.

I think most of us can reflect on and associate with the hilarious people and situations in his stories to those we have encountered in our lives. Jim reveals many facets of his interesting life beginning with his early years spent roaming the docks of Gloucester, Virginia. There he fell in love with his long lasting passion fishing. Jim uses pictures to accentuate his journey. I couldn’t figure which of all the photos I liked more. Rather than play favorites, I chose one from each phase of his life: a classic black and white depicting proud young brothers posing with their prized catch, several smallish bass. Then the tease, a pair of female legs in high heeled boots on silk sheets the onset of his mid-life crisis romances. Maybe it was Miss DCN? Closing with a sentimental look back, he uses a solitary and very mature Magnolia tree standing alone, the journey nearing conclusion. 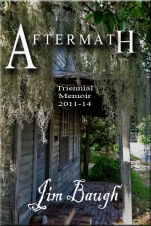 He introduces a never ceasing deluge of characters. The encounters included many familiar scenes played out in our own lives. I am certain many of us have had ‘that’ uncle. You know the one who is the life of the party in all too many ways, the kind who make even grown men blush. The judgmental elder, you know the one always looking for the worst possible side for anything we did. Some of us also have had ‘that’ romance; you know the one we elect not to talk about, except with our closest same gender friends. And of course our passions, in Jim’s case boats, fishing and his wonderful TV show. He has been graced with celebrities making appearances on the show, who knew Robert Goulet was an outdoorsman. He looks way too neat and pressed for that!

He did not close the story there; in Hooked 2nd edition he included a recent addition, Aftermath. This is a three year memoir updating readers on his journey. As many of us do, after all the chaotic and carefree moments, after the heartbreaks and disappointments, we become grounded. We find our counterbalancing partner and sail off to enjoy the sunset years. I will not spoil the ending for you. I will say Jim does all that except for ending up on Cedar Key rather than Key Largo, where he had hoped. ON Cedar Key, he celebrated the 25th production year of Jim Baugh Outdoors. The photos in the Aftermath are fun. After looking at them, I was talking like a pirate and with a yen for BBQ. Thanks Jim!

One of the most captivating elements of the book is Jim’s use of quotation’s to frame each chapter. Benjamin Franklin’s quip says it all. “If you would not be forgotten as soon as you are dead and rotten either write things worth reading or do things worth writing.” After reading Hooked 2nd it is clear Jim has accomplished both. 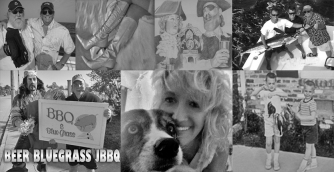 He told me he never had so much fun than writing this book and he is equally enthusiastic about the screen play. I wish him nothing but success.

BIO : Jim Baugh is a native Virginian and has been producing television shows since 1987. Programs include: Award winning Jim Baugh Outdoors TV (220+ episodes), Ski East, Classic Fishing with the Bassmasters, Fishing Virginia and RV Times. Broadcast include: The Family Channel, The Outdoor Channel, The Sportsman Channel, Fox Sports, America One and NBC Universal the Comcast Network. Jim also holds a Bachelor’s Degree in Electronic Music and a minor in Piano from Virginia Commonwealth University. He writes, performs, and engineers all the soundtracks for his television productions and regularly performs solo live Jazz piano concerts.

Posted in Uncategorized and tagged afermath, hooked screenplay, jim baugh hooked, the zebra magazinee. Bookmark the permalink.
← For your Holiday viewing and a great way to bring in the New Year!
Trade Shows Book Signings →